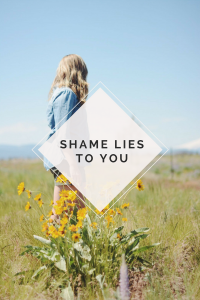 “WHY DID YOU DO THAT?????” I can hear the words echoing as they bounce around my brain as it tries to look for an answer that makes sense and at the same time looks for an escape route so I can get the heck out of there.  This question, if  indeed it was actually a question, I don’t believe it was as much a questions but instead it was a way of saying “you are so stupid, who in their right mind would do what you just did?” The tone and the placement of the words always accompanied some silly small act such as spilling water, putting something in the wrong place or you know, just generally annoying my step-dad. I knew that “Why did you do that??” actually meant something much different, he wasn’t curious he was annoyed if not downright angry and the words were meant to shame, demean and make me never bother him again in that particular way and it usually worked, “note to self, don’t ever do that again” was a  mantra I silently lived by in order to avoid the shame I felt with those words and that tone.

The silent expressions of a crazy-making home “don’t feel, don’t trust, don’t talk” were the rules in my family…and I thought ”especially never trust yourself, because you normally have it wrong otherwise you’d never hear the words ‘why did you do that???’ yelled at you.”…..this is known as shame!

Can you relate? Maybe the words were even triggering to you.

Shame is yucky! It has the same effect on all of us. It makes us feel small, worthless, powerless and is intensified because we feel exposed and naked. Shame tends to produce an implosion in the body, so we want to disappear or become as small as possible. It is much more than a feeling, it is an entire bodily state that hits autonomic nervous system like a train and sends us into crisis making us want to disappear (flight) or blame/rage towards another (fight). Shame is an isolating experience because it is a break or perceived break in our connection to others or to self. Behaving in a way that is at odds with our sense of identity can produce shame because it leaves us feeling like we lost who we thought we were.

Shame thoughts we absorb as a kid can produce life long lies we live by. Some of the shame based thoughts we think are “I am not good enough”, “I don’t belong”, “I am not lovable”, “I should not exist”, “I don’t matter”, or in my case “I am so stupid”…..shame lies tell us we are defective at the core.

The problem with shame lies is we often don’t know they are there until we are triggered and then washed with shame and by then it’s too late we want to run and hide or defend and explode. This week I was triggered when I didn’t catch a message someone was trying to communicate to me, I was in a new situation and I thought this person said one thing when in fact she said something totally different. I missed it and I acted upon that which I thought I heard instead of what she was actually trying to communicate. I felt the familiar wash of shame and I wanted to run and hide. Instead, because I have worked so hard to live into the truth and to return quickly to internal peace, I was able to take a few moments and quiet myself, then I could ask God to show me the shame lie….what is it attached to from my past? What do I believe about myself? For me the shame lie came from the hundreds of times I heard “WHY DID YOU DO THAT?”  yelled at me. Then I was able to ask myself “what is actually true in this situation?” and “what does God say about me as true?” and I was able to change my thoughts which changed my feelings and actions.

I have found this is a prayer God answers quickly, I think because it exposes the lies and reveals the truth and He so desires for us to live into truth. The next time you feel the familiar wash of shame, excuse yourself from the situation as quickly and as gracefully as you can and then find a place to be alone (perhaps the bathroom) and ask God to show you the shame lie, where it came from and then ask Him to show you what is true about you. The more quickly you can turn around shame and return to a restful heart the more you will experience living a present and joyful life.